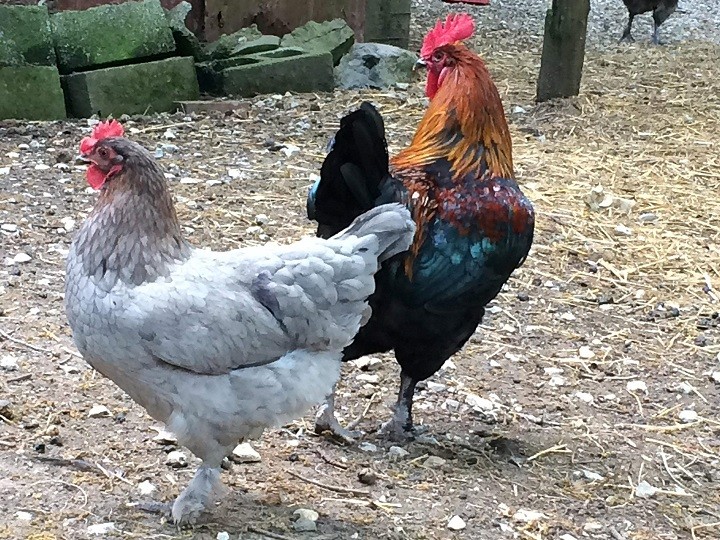 Black copper Marans is becoming famous bread these days. Usually, a good number of people who engage in these chickens have either ordered or heard about the breed from France. They are found in large numbers in France and the USA and sold to nearby hatcheries.

There exist recognized varieties of Marans, but Black copper Marans is the most common breed which has the attention of many people. They are popular because Mr. Bond liked their eggs. 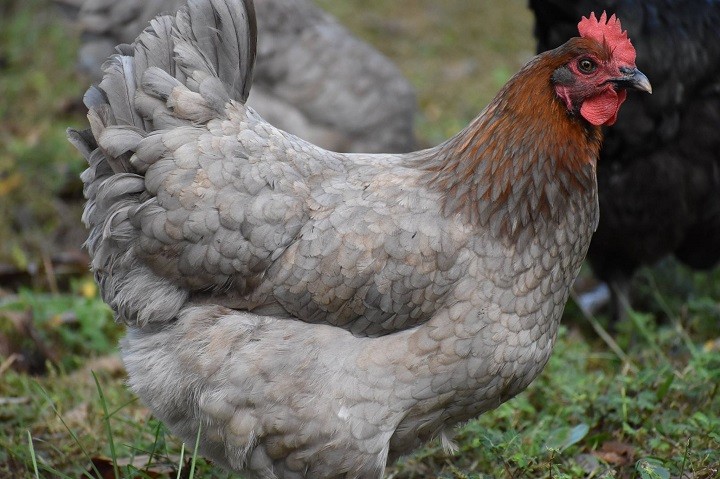 The origin of black copper Marans is traced 100 years ago in S. Western France in a place known as La Rochelle. People knew this chicken as “Swamp chickens” because France is marshy and low.

Gamecocks from Indonesia and India together with local hens crossed with Original Black copper to form a hybrid called Marandandaise fowl.

Indonesians and Indians brought gamecocks in exchange for freshwater and food, and therefore their supply was constant.

Later, Croad Langshan was added to Marans, which led to their refinement. Other breeds that were involved include; Brahmas, Coucou de Rennes, Gatinaise, and Coucou de Malines chickens.

They were also crossed to produce the Maran breed ancestors we have today.

Marans became popular with locals in France because the color of its eggs was deep red. It was unique to them, and they wanted to know more about this breed. This is the reason other people decided to keep them in their yard to witness for themselves.

Therefore, this plumage was the beauty of many places. For example;

However, this breed has passed many threats and challenges, but they survived up to today. For example, during the post-war in France, the breed was swept and was in shambles.

But a French Department of Agriculture (FDA) rescued the few left ones and started another breeding program. The primary aim of this foundation was to increase and improve the production of eggs.

They succeeded because, about 1952, Marans reclaim their famous by producing around 200 eggs per year.

Afterward, the French Department of Agriculture (FDA) program ceased, and the journey of Marans fall on the hands of curios amateurs who succeeded in keeping the breed. More so, they even improved the breed to what we have today. The breed spread to other countries like the USA and Africa in later days.

From a close picture, the Black Copper Marans have a V-shaped wide triangle body and is long, healthy, and firm.

They have an eminent plumage. Their entire body is covered with deep black feathers. However, sometimes on sunlight, you can spot the green iridescence.

They have a reddish/coppery heckle fathers. Moreover, rosters have saddle copper feathers at the back while hens are not quite so magnificently adorned, they are still beautiful birds. Black copper Marans usually have clean legs.

The firm, long and sturdy roster, can weigh up to 8 pounds while hen can weigh about 6 pounds. There is another breed known a Bantam Marans though they are rarely found.

The single crest, face, ear lobes, and wattles are red. They have a slight-hooked strong beak that is horn colored and orange-colored eyes. Sometimes, they may have pink or slate feet and shanks with white feet soles resembling their skin.

For those people wishing to buy or rear black copper Marans, remember, the birds should have dark-red breasts with minimal spots on their chest. They should also have a black triangle on their wings, and the shoulder color should be deep red.

The neck feathers, black and heckles, are referred to as ‘lancets’ whereby hens are black possessing red markings; but sometimes you can accept those with red markings in the breast.

In 2011, the American Poultry Association (APA) recognized Black copper Marans. Because of their clean legs, in the year 1935, they were accepted by a foundation known as the Poultry Club OF Great Britain (PCGB).

Today in France, there are about nine Maran recognized breeds. Varieties’ standards of Marans are not similar in different countries. It is categorized as a “continental” breed, which is a large fowl.

In the United Kingdom (UK), birds with clean legs are standard, but in France and the United States of America (USA), both sparsely-feathered portions and clean legged are recognized.

Hens are somehow docile, although this varies, they are not known for being cuddlesome birds. They are known to be active birds that feel free and enjoy free-ranging and foraging but can tolerate confinement.

Colour of Their Eggs

These birds are known for their dark brown/chocolate eggs. They lay dark brown eggs, but Black copper Marans is sought-after because of the egg’s chocolate color.

Another interesting fact about these birds is; the more eggs they lay, the lighter the color and vice versa. If the hen lays many eggs, you will rarely get eggs in dark colors. More so, some eggs will have darker-colored speckles just like well summer eggs.

Furthermore, the color of eggs can be cyclical; in the first laying season, you will have darker eggs, but when days go by, you will get eggs with lightened color.

Roughly, a hen can give you not less than three eggs per week. Therefore, per year you may have approximately 150-200 eggs.

This fact shows that Black copper Marans are middle layers, but they produce quality eggs. Besides, some of the morans hens are known to be good mothers and setters.

Therefore, if you are planning to invest in Black copper Marans, you should consider all facts about Marans in this article. Don’t try to buy a hen based on their egg color that you see in a photo. Sometimes when an egg is exposed to air for a long time, it turns its color to dark. 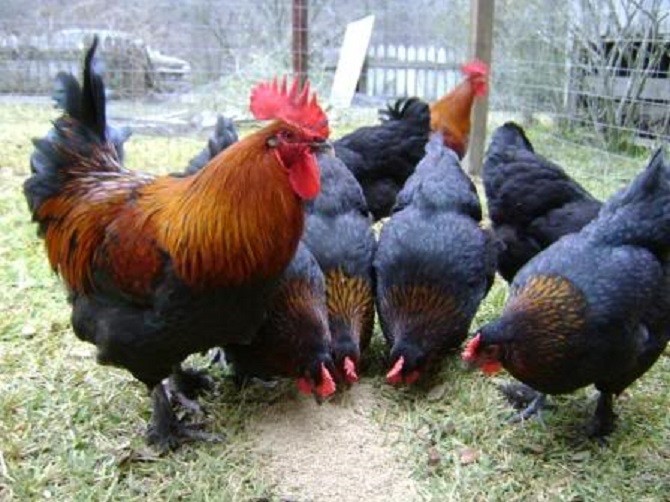 Black copper Marans are known for their beautiful egg color. Therefore is you need a superstar bird for egg-laying, this will disappoint you. With this bird, you are assured of dark red eggs that are unique in the market.

If you have been in the market for an extended period, then I am sure with this breed, you will part with massive pockets from the market.

Beware, hens that lay few eggs also lay darkest ones; the faster the eggs go the system, the lighter-colored eggs you get and vice versa.

The Maran farmers have developed a different color scale to determine egg color. These colors range from 1-9, of which 9 is the best and darkest one. Therefore, when you get only one and a quality bird, you can get up to 600 dollars

Therefore, keeping these birds is an investment that will earn you more in the future. This might be the best bet you ever placed in your life. Get a good bird from a known breeder.

I recommend a reputable breeder because of his/her long experience. Don’t buy a chicken from an amateur who doesn’t know the history of these birds.

Reputable breeders are always happy when giving out information about their lovely birds; hence, when you spend much of your time with such people, you will get more details about your little feathered friends.

1. What is the Meaning of Black Copper Maran?

Maran chicken breed is becoming popular in France and the United States of America. They are known for their unique dark red and chocolate-colored eggs. They also lay seasonally.

2. How can you Differentiate Black Copper Marans From Other Chickens?

They have a reddish/coppery heckle fathers. Moreover, rosters have saddle copper feathers at the back while hens are not quite so magnificently adorned, they are still beautiful birds. Finally, black copper Marans usually have clean legs

3. What is the Benefit of Keeping Black Copper Marans?

These chickens are beautiful and great layers for domestic keepers and breeders.

They lay dark red/chocolate eggs, making them unique and expensive. These birds can be a good investment.

4. Is it Hard to Find Black Copper Marans?

Yes, they are mainly found in France and the USA. Especially Bantam Maran breed are rare to find

Black copper Marans are many standards in France than any other country. However, it is said that the United States of America (USA) have tried keeping the birds though the project is not wide-spread.

Morans are not cheap, but you can afford them. The reason behind this is the effort and time used to produce the birds. Breeding such gorgeous birds is a very tough task.

This article provides vital information about Black copper Marans to those serious people who wish to invest in such beautiful birds.

Therefore, if you intend to start breeding Marans, consider it a live bet. Don’t be frustrated about their seasonal laying duties; good things come in a season.