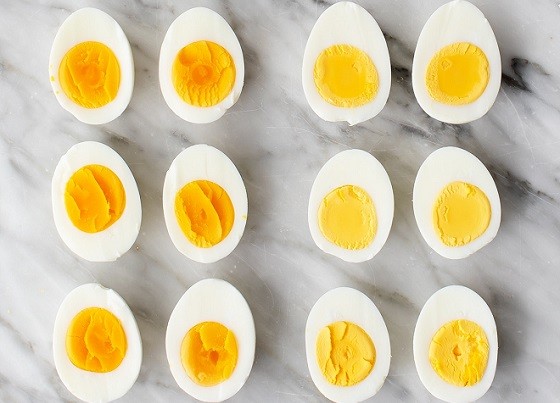 Eggs are relatively affordable and are readily available protein. Boiled eggs are mostly eggs from chicken. The eggs are prepared without removing the shells from the eggs. Boiling an egg involves immersing the egg in boiling water. They could be soft boiled, with the yolk slightly cooked and sometimes the white part. Sometimes it is hard boiled in that the yolk and the white part are fully cooked, and the shell could be peeled off with ease. The eggs are mostly used for breakfast. The eggs could be used for making toast; some communities use it as an ingredient while others serve it alongside other dishes. Hard boiled ones are mostly sliced and used for making sandwiches or salads.

The period and the temperatures vary depending on the consumer’s preference. Some people prefer the hard yoke, while others prefer a softer yoke. To attain the consumer’s preferred degree of cooking, a hard boiled will definitely take longer than one who wants a barely cooked yolk. With the varying egg consumer preferences, there is various cooking equipment as well as methods. The different kitchen equipment is suitable for different methods as well as boiling temperatures.

People have different tastes for so many things, and food is not an exception. Different people prefer different degrees of boiling an egg. The choice could be due to one’s liking or their present need for the egg. For this reason, there are the following types of boiled eggs:

1. A hard boiled egg- is characterized by a hard, cream-like, and compact yolk. It is boiled for about 15 minutes. One should be careful while timing the boiling process. Over boiling could result in the yolk being so hard and crumbling, and a black layer could easily form between the yolk and the white part. This type of eggs can be eaten while still warm or can be left to cool before eating. Several dishes could be prepared from the hardboiled egg.

2. Soft boiled eggs have a molten yolk, and sometimes the white part is also partially cooked. It can be boiled for about 4minutes. These eggs should not be eaten with people who are at the risk of suffering from salmonella. The eggs are mostly served in egg cups where the top is removed by either a spoon, knife, or any relevant cutter, and then the contents scooped with a spoon. The eggs can then be served with toast. In some communities, instead of serving the egg in the egg cup, it is cracked into a plate and mixed with sauce or pepper and slightly cooked before it is eaten together with the sauce.

In some places, it is used as ingredients to make dishes like the pancit for the Philippines.  On the other hand, the Japanese mix it with soy sauce, mirin, and water resulting in a brown mixture that could be mixed in a soup or served separately.

3. Medium boiled eggs-most preferred type. The yolk is not hard but slightly soft. It is boiled for about 6 minutes.

How to prepare Hard Boiled Eggs

The best eggs to boil and bring out the best outcome are at least three to five days older. The eggs should not be too old, like more than one month. Very fresh eggs are hard to peel since they tend to stick on the shell, which is nobody’s joy. To boil the eggs, one needs only an egg and no other flavors, whether it is a white egg or a brown egg. You may have salt and pepper but only for serving.

One needs to have the following equipment,

The egg could be eaten immediately or can be stored at the refrigeration temperatures for seven more days. At ambient temperature, the egg should be eaten within two hours.

The ease of peeling the egg greatly depends on the choice of the egg. It is difficult to peel a fresh egg. A good choice of an egg should be at least 4 to 5 days old and not more than one month old. A refrigerated egg is recommended. As days go by, an egg loses moisture and carbon dioxide through the pores in the egg’s shell. Losing these contents leads to reduced content inside the eggshell as well as lowering the acidity level. An egg with lower acidic value and air spaces created by moisture loss is quite easy to peel.

The egg could be peeled partially or wholly. To peel the egg partially;

To Peel the Egg Wholly;

The egg can be eaten with salt and pepper according to one’s preference.

How to Prepare Soft Boiled Eggs

Soft eggs are preferred at different levels of softness. Therefore, this indicates that different times should be set on the timer depending on the degree to which one prefers the softness. Some boiling preferences are as shown;

The eggs are the basic ingredient that is required; any other ingredient can be required at the serving time according to an individual’s choice. One is advised to go for the refrigerated eggs since refrigeration preserves the quality of the egg.

Equipment required is a pan with a lid and a timer.

Just like the hard boiled eggs, the eggs are placed in a pan and covered until boiling. The following procedure could be used for soft boiling:

The soft boiled eggs could be stored in the refrigerator for two to three days.

The boiled egg could be peeled whole or part. Depending on how and where the egg is served could dictate the peeling.

Some of the soft boiled eggs are served in an egg cup; this can be easier to peel partially. The top is chopped using a knife, a spoon, a spring-loaded egg topper, or egg scissors to peel a soft boiled egg in an egg cup. A teaspoon may be used to scoop the soft egg from the remaining part of the shell. The egg in the egg cup could also be peeled by tapping the top part of the shell several times using a spoon.

In some places like South East Asia, the eggshell is cracked open into a plate.

A not very soft egg like the firmer soft boiled is peeled by several taps and rolls of the eggshell either on one half for partial peeling or the whole egg for the whole peeling. The loosely cracked part of the shell is removed alongside a thin white lining. The peeled part could be rinsed under cold water t get rid of any tiny pieces that may be left on the white part. The partially peeled may be eaten with a spoon out of the remaining shell. The egg could be eaten with salt and pepper as one prefers.

Medium boiled eggs are the most preferred.

The preparation process is similar to that of the hard boiled eggs, but after boiling the water and turning off the heat source, the timer is set to six minutes.

After the eggs have been cooled by covering them with ice and cold water, the peeling is just like that of the hard boiled eggs.

The medium-boiled eggs can be stored in the refrigerator for 2 to 3 days, just like the soft boiled eggs.

Eggs are very rich in nutritional value. Eggs are a relatively cheaper and easily available form of protein. They are also rich in vitamin B2, which is a great aid in the growth of cells and metabolism regulation. Eggs also have high contents of sulfur, which helps in the intake of vitamin B and the functioning of the liver. Besides there ready availability, eggs are very easy to prepare as they involve very little effort and the ingredients required. They are several other ways of preparing eggs, but boiling is the simplest and less involving. Anyone can easily prepare boiled eggs of their preferred degree at any time. Boiled eggs can be eaten alone or with other dishes, either way, they are very tasty. Nutritionists advise that one should take a boiled egg mostly during breakfast.