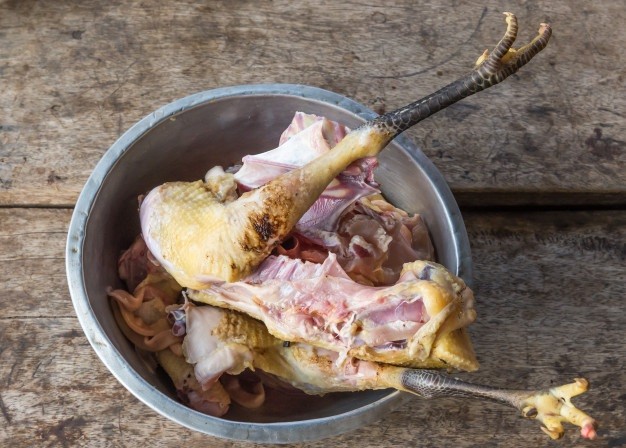 Preparing a live chicken for consumption can be intimidating for many people, but the process is really very simple.

How to Slaughter a Chicken

The first step in preparing your live chicken for consumption is also the hardest: you have to kill the chicken. This is difficult, but rewarding.

Fortunately, it’s fairly easy to ensure that your chicken dies quickly and painlessly when your the one doing the slaughtering. First, you need to purchase a killing cone like this one. While it is possible to slaughter your chicken without one, it makes the process much quicker and easier, both for you and your chicken.

You’ll also need a very sharp knife, and a bucket. Place the bucket under the killing cone, and place the chicken in the cone, head down. This is easier to do than you think, because grabbing the chicken by its feet and holding it upside down will actually calm it very effectively, making it easy to place in the cone. The head should be protruding from the cone.

This will hold the chicken very steady while you slaughter it, and will keep it from panicking. You’ll need to grab the chicken’s head, and with a firm, deep slice, sever the carotid artery and the jugular vein. This will require one cut on each side of the birds neck, just behind the base of the jaw. Now you need to pull the head down firmly to allow the blood to drain. The chicken will be jerking and kicking a lot, and while this can be stressful, know that the chicken if completely unconscious and not experiencing any pain.

Scalding and Plucking your Chicken

Plucking a chicken is much more difficult than most people realize at first. If you try to simply grab the feathers and pull them out, you’ll tear the skin, miss many of the feathers, and end up very frustrated.

The best way to plucking chicken use chicken plucker machine,  another way to plucking the chicken easier is to scald it with hot water. This will open up the pores in the skin and make it easier to remove the feathers. To do this, first fill a large stock pot with water, ideally before you begin slaughtering the chicken, and heat the water to around 140 degrees Fahrenheit.

Holding the chicken by the feet, dunk it into the water and swirl it around, not just side to side by up and down as well, making sure all the feathers on the leg are covered in water. To test if the bird is ready to be plucked, rub your finger against the grain of the feathers; if they come out easily, you can begin plucking. If they do not come out easily, it needs to be scalded longer.

When it’s ready to pluck, you can either lay it down on a cutting board or hang it up by its feet, with another bucket nearby to collect the feathers. Rather than plucking each feather individually, simply rub them against the grain to remove them. However, for the large tail and wing feathers, you do need to pluck them individually or you’ll tear the skin.

Don’t forget the pin feathers, either. These are the “pins” left behind in the skin by some of the larger feathers in the breast, wing, and tail. You can buy a special pinning knife for this but the back side of a standard table knife works just as well. Take the knife and gently scrape it along the skin, against the grain of the feathers. It will pull out most of the pins, but you may need to pinch some of them between your thumb and the knife and gently pluck them.

Hose the bird down to remove any loose feathers before you move on to the next step.

The oil gland is located just above the tail. If you don’t remove it it can ruin the taste of the meat. Make a small cut above the gland, and slide your knife underneath it, and cut all the way down to the tail to remove the oil gland.

This is very simple- all you need to do is pull the leg straight, and slice through the joint between the foot and the drumstick. You should be able to slice right through the tendons in the joint without cutting bone.

Along with the head, you’ll be removing the trachea, esophagus, and the crop. First, cut the head off- you will need to slice through bone for this, so a cleaver may be helpful. With the head gone, cut the skin along the back of the neck and pull this skin all the way down. You should now be able to easily separate the trachea and esophagus from the neck. Be sure to do this all the way down in to the body cavity, at which point you should feel the crop. Detach the crop from the skin, and then leave all these pieces loosely attached where they are.

Make a small incision in the skin about an inch about the vent, and cut all the way up to the breastbone. Then carefully cut around the vent on both sides so that it will come out cleanly with the intestines.

Reach in to the body cavity, running your hand along the ribs on both sides to loosen the internal organs. Find the gizzard- it should feel hard and round- and pull it out. The rest of the entrails, including the trachea, esophagus, and crop that you loosened earlier, should all come out with it.

The lungs will still be in the body cavity. Reach in and feel along the spine until you feel them- they feel squishy. Pull them out. They often break into pieces, so keep going back in until you can no longer feel any lung tissue.

Remove the neck by cutting the muscle around the bone, and then bending and breaking the bone. Now be sure to wash all the tools you used in the process. You’re now ready to chill and package your chicken.