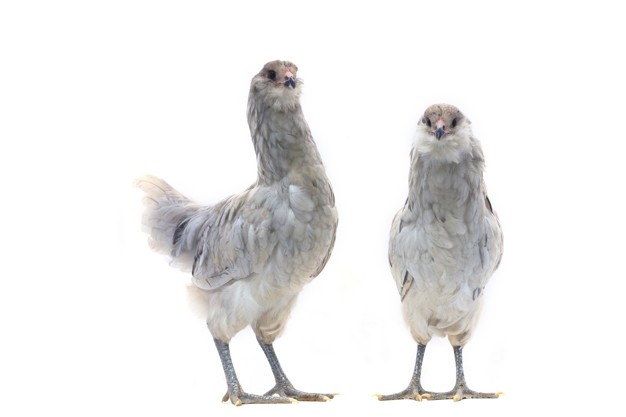 Every chicken farmer or keeper wants value for their money. If you need to invest in a venture that is lucrative especially when purchasing and growing a flock of chicken, consider the Ameraucana breed; a pure and rare breed that has so many advantages.

If you have noticed the striking blue eggs in store shelves and thought what magnificent birds they are from, we introduce you to one of the newest breeds of chicken to American farms; the Ameraucana chicken. This rare breed is slowly getting the acceptance it deserves and is value for your time and money. We delve into the history of the bird since its introduction to the country; its distinguished physical features; the best and worst traits it possesses; benefits and challenges when keeping them and how to care for and maintain them.

History of the Ameraucana 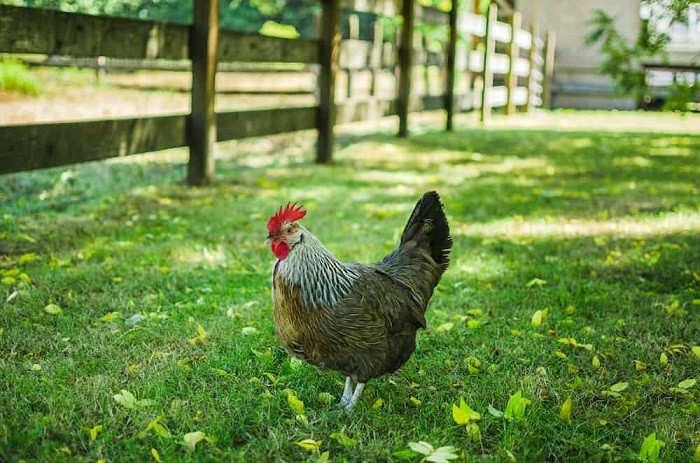 This breed is as a result of cross-breeding between the Araucana and other breeds of chicken. It makes it one of the most recent introductions to the American poultry farms, having been incepted into the American Poultry Association in 1984. The parent breed (the Araucana) which can be traced to Chile in South America was prone to a gene that caused the death of chicks while they were still in the shells. This Araucana breed can also be traced back to its parents; the Quetero and the Collonca from the 1500s. If two Araucanas that possessed the tuft gene mated, the offspring would have a very slim chance of survival. They would die even before they hatch. The breed still had other desirable qualities that breeders wanted to preserve such as their magnificent blue eggs. They opted to cross-breed them with other breeds to eliminate this fatal gene that killed chicks but maintain the other original desirable qualities.

History documents a certain breeder, Mr. Keller from Pennsylvania, as one of the breeders that came up with the idea to cross-breed. The resulting Ameraucana breed was then presented in the 1970s with the tuft gene having been eliminated. The breed still possessed other great qualities from its parent breed. Over the years, the breed has been very productive and the lethal tuft gene is now a thing of the past and farmers need not worry about their chicks dying before hatching.

Physical Features of The Breed

Most of these birds have a strikingly colorful look. You will easily notice them in a flock. They come in around eight colors; buff, white, blue, brown red, wheaten, blue wheaten, silver and black.  For chicks, they will need some more time to feather out before you can determine the shade of their feathers. The color of their legs ranges from a dark blue to black with four toes on each one. They are heavily feathered animals but there are no feathers on the stem of their legs; the heavy feathering makes most of them hardy in the severe winters. Their tails are raised and the beaks are slightly curved.

You will also notice the feathers that gather on their face and under their beak. Another noticeable feature is the red crown on the head. The birds are either in regular or bantam size. The regular sized weigh around 6lbs for roosters and 5lbs for the hens while for the bantams, the roosters weigh approximately 28Oz while the hens average at 25Oz.

Their red combs and eyes make them appear ferocious even though they are quite gentle creatures. This trait makes them ward off predators because they always seem ready to attack. The birds appear tame but they are not very cuddly. Most of them prefer detachment from other domestic animals and humans. They would rather remain in their flock than mingle with other creatures; not such great qualities for a pet.

The birds are intelligent and are always wary of their surrounding, swift movements and clamor agitates them; a quality that makes them easily evade predators. The breed has different physical features which depend on their genetic modifications and their surroundings.

Their eggs are a beautiful blue hue; egg collectors will enjoy stocking them up. They are rare to find on shelves so you will enjoy providing them to the surrounding people. When new to the country, it was perceived that the eggs were more nutritious but over the years, this has been disputed. They have the same nutritional value just like the normal white or brown eggs. A downside to this is that some people find it weird to consume such colored eggs; they would rather go for the normal white or brown shades.

The Ameraucana hen is a good layer though some keepers state that you have to wait longer before they start laying. Some will go up to six months and when they do, they lay three or four eggs a week. It takes a minimum of eight weeks for them to start laying. This is ideal if you want tasty breakfasts and dinners. If your goal is to hatch more eggs, you can acquire an incubator as well.

They produce very healthy and tasty meat as well, although some types have tough meat depending on their environment. Keeping a flock guarantees nutritious and tasty meals for you and your family.

Benefits of Keeping the Ameraucana 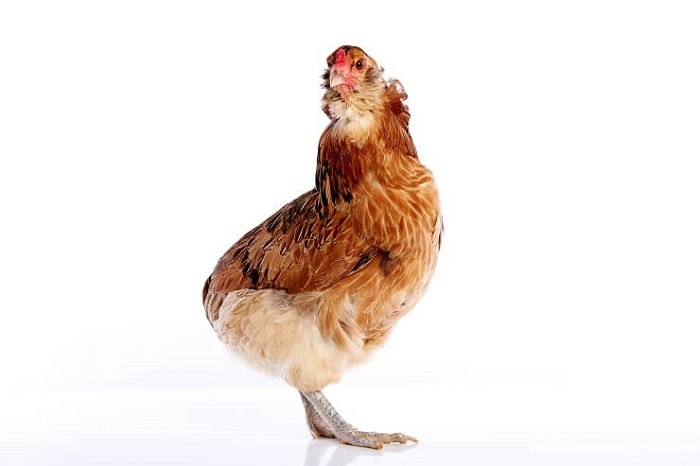 You will reap heavily from keeping a flock of this breed. They will provide tasty colorful eggs for you to display or eat, their meat is tasty too. This is very lucrative for a farmer that wants to venture into large scale production. For small scale keepers, the breed can be a great pet especially if you find one that is gentle and cuddly. If more ferocious, you can slowly win them over by hand feeding and spending more time with them. The birds can easily cohabit with other birds due to their friendly and benign nature.

As mentioned, the breed comes in either the regular size or the bantam; you can never go wrong with keeping the bantam-sized chicken. They are easier and cheaper to maintain, so if keeping the large-sized chicken is a challenge to you, go for the bantam-sized of the same breed. They will occupy less space and are adorable to keep as pets even for children. You don’t need to worry about the giant, mean ferocious chicken any more.

The breed can thrive in almost any climate as long as it is not extreme. They easily adapt to environmental changes which makes them survive in most parts of the country. Their puffy feathers for instance provide great insulation from the winter. However, you still need to ensure their safety by building coops that will protect them from extreme weather cases.

On the upside, the chickens are not prone to evasion. They are not great at flying off like other birds. A secure high fence will keep them grounded and you will not have to worry about them escaping. It also helps that they are sensitive and intelligent creatures. They easily sense danger so, they scamper to safety before attack. You are assured that they will be safe even if they are left alone.

The birds love their space. All you need is a coop to keep them safe but otherwise they are birds that will free-range for the better part of the day. This is a great way to feed them as you play and bond. If you are lucky to establish trust, you can go ahead and pet them.

Professional breeders state that the Ameraucana can live longer than other chicken as long as it is well taken care of. With some living up to eight years, they can easily outlive their counterparts. You will have a great bird that will stay and serve you longer. As much as they can live longer, it is normal for them to be rendered less productive as they advance in age. This is common for any other creature.

This breed is ideal for anyone who wants to venture into poultry farming whether you are a beginner or an expert.  The returns are enormous in case you want to keep them on large scale. They are low maintenance birds that do not require specialized care hence easy on your pocket and worth every penny of your money.

Challenges in Keeping the Americauna 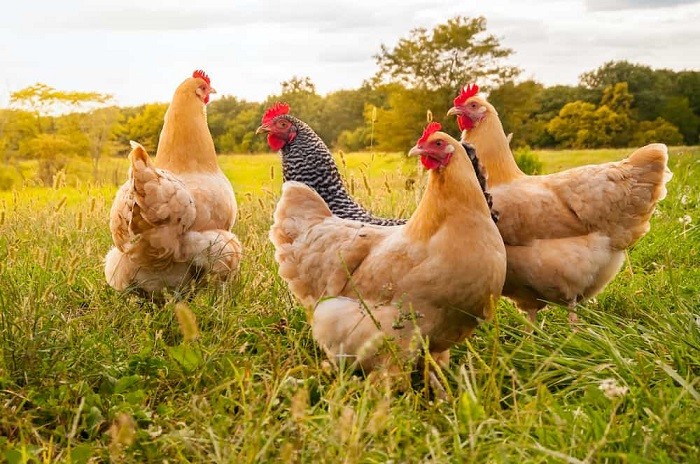 You may want to skip on this breed if you are going for a breed that is safe to keep as a pet. Most of them are ferocious especially the roosters so be careful leaving the children around. It is not the most cuddly and pet worthy bird unless you go for the bantam-sized type which is smaller and less docile. As much as they are not very aggressive, they are still not very safe to keep as pets. Another reason why you should consider another breed for a pet is that the Ameraucana is a species that does well in separation. They prefer being in their flock or with other birds. Most of them do not like too much interaction with humans or other animals.

You have to keep them separately from other domesticated animals else they will be easily aggravated. They are easily scared hence will not mingle with bigger creatures and their ferocious look and nature only makes it worse.

They also need a large space where they can free-range especially the regular-sized chicken; a tiny backyard is not conducive for them. It is nearly impossible to confine them in a cramped up structure. You need a larger space for them to free-range and mingle with other flock members.

The breed is generally a healthy and happy bird. You need not worry that they possess a lethal genetic mutation. They are only affected by the common parasites and diseases that attack any other bird especially those in a flock. Only worry about the common illnesses that affect birds so always be prepared to keep them safe.

As stated, the breed does not require any specialized treatment when being cared for. All you need is to build a safe, strong structure that keeps them safe from predators and harsh weather. Ensure that their pen is enclosed and provide a hideaway for them in case of any attacks. The birds do well when they free-range so have a bigger space for them to roam around in.

Since they are mostly withdrawn, limit contact between them and other domestic animals in your farm. This will prevent confrontations and injuries. The breed thrives on close interaction with its own kind so always keep them together.

Provide them with the right food and water for their survival. Food supplements will tremendously boost their production. Since they are good foragers, you can opt to feed them even as they free-range.

Lastly, keep their surroundings clean at all times. Regularly clean out their coops and provide their food and water in clean containers. Hygiene is paramount to keep parasites and diseases at bay.

Note that the breed is very similar to the Easter Eggers so be keen not to be duped of your money. The two are similar especially the light blue color of their eggs. Since the Ameraucana breed is rare, it is more expensive to purchase; this is how you distinguish them. Most of them retail at $20 for a hen and $18 for a rooster. Anything going for a lower value is a different breed.

There are more benefits in keeping the Ameraucana breed than there are challenges. The good outweighs the bad so it is a good thing to try. It is highly recommended because of how productive and lucrative it is. They are a great investment to venture into large scale production or even for subsistence use. You will get colorful rare eggs, sweet meat and you will enjoy having the colorful creatures waddle about in your farm or backyard.

If you keep them healthy and safe, you will reap more and enjoy your farming.